Professional Performance From Hanley In 2-1 Victory Over Leek CSOB

Goals from Danny Needham and Kie Brown gave Hanley Town the win this afternoon against an energetic Leek CSOB side in our first pre-season friendly.

The first chance of the game fell to the visitors after a slick pass set their striker through on goal – Ben Chapman in goal for Hanley equal to the strike.

Good then in the 12th minute almost opened the scoring, taking on his man before his goal-bound shot was blocked.

Seven minutes later Hanley did take the lead after Kie Brown’s shot was flicked on from the corner by Danny Needham past the visitor’s keeper.

It was just four minutes later when Brown got his reward for his efforts, after Good took on two defenders before getting to the by-line and putting the ball on a plate for the new Hanley striker.

It could have been three not long after, when Jake Langridge rose highest to connect with a delicious corner and Brown was there to flick on his header, but he could only head the ball against the post.

Leek did grab a goal back before half-time, as Warren Holmes pulled up with a hamstring injury leaving the Leek forward to run at goal unchallenged and loft the ball perfectly over Chapman.

The second half saw Hanley field a completely new eleven, but it was a half of very little chances for both teams.

The visitors had several opportunities to get in behind, but the Hanley defence kept their concentration up and held the line well, catching the opposition offside on numerous occasions.

Experienced striker Nev Thompson had a couple of chances to kill the game off in the final ten minutes, the first saw his shot blocked and the second after he weaved in and out to make space for his shot which did not trouble the keeper.

Our next friendly will be against Uttoxeter Town on Tuesday 11th August, with kick-off at 7:45pm.

With the upcoming friendlies fast approaching we as a club want to reiterate the message that all games will be played behind closed doors. This is up to date with the latest government guidelines, if these were to change we would inform you through our social media accounts.

The 29-year-old goalkeeper joins from Leek Town in the tier above Hanley.

Chapman, also a former player of Nantwich Town, Newcastle Town and Kidsgrove Athletic, will add experience in between the sticks to help the clubs ambitions for the season.

Mick Morton seemed pleased with the latest addition: ‘Happy get chaps at the club he’s an experienced goal keeper. Who adds to the spine of the team where we’re trying to build the team around.’

Speaking the the media team earlier Chapman said: ‘Really pleased to be here. Hanley Town is a local club where I started playing when is was 15-16 when codger was here. Know a few of the lads, Micky, new chairman has come in wants to do the right thing build a good club and I want to be a part of it.’

We are extremely pleased to announce the fifth signing so far this summer, 19-year-old midfielder Nathan Okome.

Okome signs from table toppers 1874 Northwich FC, and he will become another new member of the new era at Hanley Town.

Previously a player at Knutsford FC, Okome is an exciting young talent who is hungry to make an impression this season.

Speaking to us earlier Nathan said: ‘Yeah I’m very happy to join the club. I’m looking forward to the new season, can’t wait to get started. Try get as many wins as we can and just build from there.’

Manager Mick Morton has this to say: ‘Very happy to get Nathan at the club. He’s a big strong lad that will be coming in to the midfield given us some strength down the spine of the team.’ 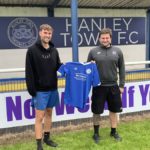 Hanley Town are pleased to announce the signing of centre-half Warren Holmes, ages 25. He joins the new vision of the club after recovering from a torn anterior cruciate ligament.

Previously of Alsager Town, Holmes is a commanding centre-half and will provide a lot of stability to the back line.

After joining the club this is what Warren had to say:

“After talking to the chairman and the management team it was clear the club has big ambitions for the next few years and you can see around the ground they’re already been working on things off the pitch.”

“The group of lads that are already here are a good bunch of players, hopefully I can settle in quickly and be an asset to the team on and off the pitch – and the key thing for me is to stay fit and the club are willing to help me.”

Manager Mick Morton seemed pleased with the new addition to his side:
“Very happy to get Warren at the club, he’s been a player we’ve been after for a few seasons now. Unfortunately last time he was at a club he was struck with injury, but Warren will bring great experience to the squad.’

The FA has confirmed the league allocations for next season, currently scheduled to start in September.

Our First Team will remain in the North West Counties Premier Division, with the makeup staying the same as last season.

Our Reserve Team meanwhile will remain in the Staffordshire County Senior League Premier Division (Men Unite Premier), which will have new additions to the league, taking the total number of teams to 17.

Only 20, Stevens has today joined Hanley Town as a part of our new vision. He had this to say
“To join Hanley for this season is massive for me personally, to be part of a club with massive ambitions for the season is huge. Ever since I came down for the first session I could see how great the set up is and how great all the lads are. Speaking to the Gaffa and the chairman did the deal for me really both are really good people with massive intentions for Hanley.

After the previous signing of Kieron Brown, Hanley manager Mick Morton had this to say about his new signing.
“Very happy to have jack on board, he’s a young lad that’s just been let go by port vale. He’s a great lad to have around. You can see in training he works hard, he’s a wide player very quick and he’s something which we’ve being looking on bringing in.” 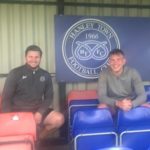 We are delighted to announce the signing of Centre Forward Kieran Brown.

Manager Micky Morton states “I’m very excited to have Kieran on board with us. He’s a lad we kept our eyes on back end of the season when he moved to Newcastle Town. He scores goals, he’s a big strong lad. I’m very much looking forward to working with Kieran.”

“After speaking to the gaffer a few times, it’s clear that Hanley are on the up, everyone I’ve spoken to about the club are excited about the new chairman coming in and taking us in a new direction. After meeting him I can tell that’s something we’re pushing for this year. It’s something I’m looking forward to being a part of, and can’t wait to get started.”

Following the relaxation of lock down, we are now taking provisional bookings for our Function Room.

For those who have not used us before, our normal capacity is 120, though this will be governed by government guidelines.

We are happy to arrange a viewing with interested parties.

Dates are going quick so please contact the club for availability.

Following the announcement last week of next seasons admission prices for our First Team, today we can announce that for our Reserve side, there will be no charge for the home matches next season. This is part of an initiative by the club to boost attendances at these matches.